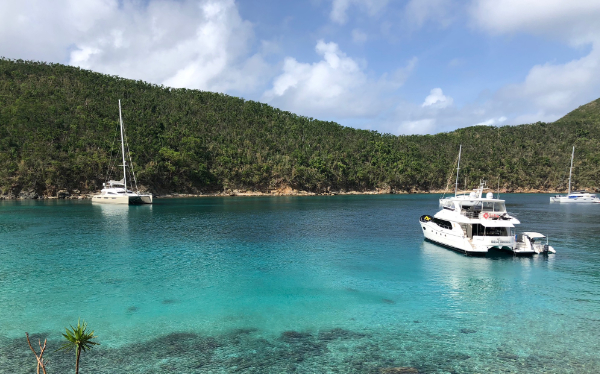 They are not in the news anymore, but I wanted to bring you a BVI update about chartering in the Virgin Islands this year. After the destruction caused by last year’s storms there has been a massive and spectacular recovery. Many of the smaller and uninhabited islands were ready for visitors by Christmas – the beaches were cleared of debris and the vegetation sprang up very quickly. Since then the recovery has only gained in pace with re-openings of famous haunts and clearance of popular bays.

I’ve been speaking to crew who are currently in the Virgin islands for their comments. Jenn Hart aboard the 60ft power cat SEA BOSS, says beaches are now looking great and most of the usual spots are up and running. Although the resorts at Peter Island, Little Dix, Saba and Bitter End are still closed, rebuilding is under way. Jenn says she would definitely add a day trip to Oil Nut Bay as a new feature for charterers. Guests can have lunch, order drinks in the swim up pool, sail Hobie-Cats, kayak and paddle board off the beautiful and exclusive shores, all the while enjoying the red-carpet treatment rolled out by the excellent staff.

On the topic of dive sites, I’ve been in touch with Jerry Blair, an experienced diver and Captain of the 62ft catamaran COPPER PENNY. He said that while some of the sites had been damaged you are still spoilt for choice as there are so many excellent sites. The fish are still there, the turtles, the stingrays even the lionfish. He said that last week he was swimming for an hour with two wild dolphins near the Baths.

The BVIs are also known for their bars. The legendary floating bar, Willy-T or Willy T3 as it will be known has just opened in its new location – Great Harbour, Peter Island. Other famous bars such as the Soggy Dollar and Foxy’s both on Jost Van Dyke are open and in full swing. Rebuilding has started on Bitter End Yacht Club on Virgin Gorda. And there are dozens more, ready to welcome guests.

Anegada was fortunate in that it escaped the full force of the storms. As a result, most of the hotels and beach bars were quick to open including the famous Cow Wreck Beach Bar. The low-lying Anegada is famous for its beaches and Caribbean lobsters.

Tortola, the main island in the BVIs was really devastated as you might have seen in TV coverage just after the storm. Nearly a year on there is still a massive amount of rebuilding taking place, improvements too, but businesses and shops are open and getting back to normal stock levels. Provisioning for yachts is excellent.

And what of the boats and crew? Some boats were lost, sadly, but this has made room for some stunning new boats which I hope to be seeing later this year at the Tortola and Antigua boat shows.  Some crew have retired but several of my old friends are back on new boats and continuing to be the perfect hosts as ever. The vast majority of yachts however, which charter in the Virgin Islands during the winter season were out of the area at the time for the storm season and so completely safe. Last winter some of them chartered in other areas of the Caribbean such as Antigua or the Grenadines which were untouched by the storms. More yachts will be back in the Caribbean this winter such as the stunning OHANA, a 163ft superyacht and dozens of large motor yachts.

If you would like some recommendations for your winter yacht charter holiday, we’ll be happy to help.